The REAL Magic of Santa Claus

A few days ago I journeyed from my quaint personal North Pole of Ashland, Oregon, to the metropolis of Southern California where I’ll spend the next 4 months portraying, and in many ways “being“, Santa Claus.

I’ll be in TV shows and commercials; I’ll make many personal appearances at Christmas parties and other gatherings. I’ll also be the Santa Claus that people see at the grocery store, driving down the street and riding his bike along the beach… I will be recognized many thousands times, perhaps even millions of times, as Santa Claus… but what is the REAL Magic of Santa Claus?

Many children believe Santa Claus has magical powers, how else can he deliver all of those presents, all over the world in such a short time?

Some kids think magic is in the elves who make the toys, the sleigh and the reindeer.

The real truth is- THE MAGIC IS YOU, because YOU ARE the elves’, the sleigh, the reindeer and the REAL Santa Claus.

I'm simply a portrayal artist, an image, an icon for the magic…. but the magic is you.

But here’s an interesting question. Why?

Why have we, many generations before us, various cultures around the world, religious, spiritual and secular people all embraced and built on this legend of Santa Claus? Why do we as children relish in the mystery of Santa Claus and why do we as parents perpetuate the myth?

Understanding the kids’ part is pretty easy. Children love the mystery, they love the presents and I think they like the fact that the presents go to NICE boys and girls. Santa helps children feel special, they know that they are being acknowledged and rewarded for being nice.

But why do adults keep all of this going… now that’s a bit more difficult question?

Some people say it’s the merchandisers, Coca Cola, Macy’s and all the rest that perpetuate the myth.  Others say it’s consumerism and our drive to have more and more stuff. I think both of these assertions are a bit cynical and leave many questions unanswered. Questions like: Why do so many people increase charitable donations and give anonymously during the Christmas season?

Giving is much like making love, it makes us feel good. I’m not talking about a physical sensation; I’m talking about the feeling of emotional human connectedness. In a way giving is selfish. We do it because WE feel better after we give. We like being givers… we like being Santa Claus.

For centuries wisdom traditions of all sorts have recognized that we benefit by giving. Charitable organizations exist solely because we feel better when we give and you might be surprised to learn that most giving is done by those of modest means. In a series of controlled experiments, lower-income people and people who identified themselves as being on a relatively low social rung were consistently more generous with limited goods than upper-class participants were.

So the true Spirit of Christmas, and the perpetuation of Santa Claus and the magic that you bring to me, the icon, serves a very real and important role in our lives and in the evolution of society. Santa Claus connects the next generation with the compassion of giving.

Many new parents have a challenge with the whole concept of Santa Claus. They don’t know if they should continue the myth or if it’s wrong to mislead their children. My wife and wrestled with this when our kids were young.

Neither of us was religious, we had no spiritual practice. The fact is we are both very secular at the time… but we both loved Christmas. We wanted to give our kids presents and we liked the idea of the presents coming to the kids from someone else, someone who was not spoiling them but simply showing their love and giving to them because of who they were… good kids who were on the nice list. 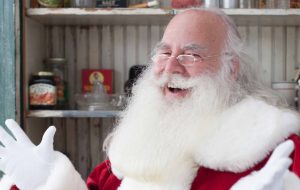 I understand that embracing, and in fact becoming, the magic behind Santa Claus can be a daunting responsibility for new parents. I understand that it can be very easy and rational to simply be “honest” with the children and tell them there is no Santa Claus… but wait- is that the truth?

Perhaps there is a Santa Claus after all, a Santa that is not a lie, a Santa who is fun and loving and a reminder of who we are; givers. A Santa you can work your magic through and a Santa you can use to teach your children the value and joy of giving… not just to their children and family but to others as well.

The REAL Santa Claus is not a person, it’s a concept. By you being Santa Claus you are letting others know that they are loved and appreciated and by being Santa you remind yourself that you are the kind of person you want to be, a giver.

P.S. If you are in Southern California keep an eye peeled for me. I could be anywhere.

2 thoughts on “The REAL Magic of Santa Claus”