Today I want to talk with you about miracles and about cultivating a miracle rich environment.

A few years ago I was accepted by the top commercial talent agent in Hollywood with no previous experience or connections. I see this as a miracle.

2 years ago the top strabismus doctor in the country GIFTED me with a free surgery that corrected my Lazy Eye. Another miracle.

When I experience these extraordinary events I'm full of wonder… and during the last few years I've seen these miracles increase exponentially and I started to look for the reasons why.

The more I expect miracles to occur… the more they occur.

But I've found that it's not the expectation that brings about the miracles it's the actions that follow and mindset that accompanies the actions.

By expecting miracles and acting on those expectations while at the same time not being connected to the outcomes of the actions themselves… this is the magic and the formula for bringing about miracles.

This principle of detachment is not new.

Many thousands you years ago it was written in the Bhagavad Gita that "When we detach ourselves from the fruits of action, contentment comes. AND Contentment is the source through which we become free."

More recently, but still over 100 years ago Rudyard Kipling wrote the amazing poem IF. Because it was written so long ago I updated a few words and I changed the last line to be more gender neutral.

Listen for the spiritual principle of detachment…

If you can keep your head when all about you

Are losing theirs and blaming it on you,

If you can trust yourself when all men doubt you,

But make allowance for their doubting too;

If you can wait and not be tired by waiting,

Or being lied about, and not deal in lies,

Or being hated, and not give way to hating,

And yet don’t look too good, nor talk too wise:

If you can dream—and not make dreams your master;

If you can think—and not make thoughts your aim;

If you can meet with Triumph and Disaster

And treat those two impostors just the same;

If you can bear to hear the truth you've spoken

Twisted by scoundrels to make a trap for fools,

Or watch the things you gave your life to, broken,

And stoop and build ’em up with worn-out tools:

If you can make one heap of all your winnings

And risk it on one turn of pitch-and-toss,

And lose, and start again at your beginnings

And never breathe a word about your loss;

If you can force your heart and nerve and sinew

To serve your turn long after they are gone,

And so hold on when there is nothing in you

Except the Will which says to them: “Hold on!”

If you can talk with crowds and keep your virtue,

Or walk with Kings—and not lose the common touch,

If neither foes nor loving friends can hurt you,

If all men count with you, but none too much;

If you can fill the unforgiving minute

With sixty seconds’ worth of distance run,

Yours is the Earth and everything that’s in it,

And, which is more, the game of life you have already won.

To meet with these things that our culture calls Triumph and Disaster and treat those two impostors just the same; that's the fertile ground where miracles are born.

When you expect miracles and move towards miracles and find your satisfaction in the doing; with no attachment to the result… when you're living in, and you are content in, the moment, regardless of what it contains… that's when miracles flow into your life… or they don't, and either is OK… but it is living in that fertile place, the present, that allows miracles to flourish.

Another personal example of what I'm calling a miracle happened last year when I became eligible to join the actors union SAG-AFTRA within only a few months of starting my acting career when many actors go years without earning eligibility.

Another recent example was when I was selected to be the exclusive national spokesperson for Hello Santa, the first video chat with Santa app. I was even given equity in the company and when we sold the company earlier this year to Internet media company JibJab I was then retained by JibJab to continue on as spokesperson and they have even expanded my role.

I can go on and on and on… but the message here is that miracles really can, and do, flood into your life and you start cultivating a miracle rich environment.

When you dream—and not make dreams your master; and when you can think—and not make thoughts your aim; when neither foes nor loving friends can hurt you

This is where miracles flourish

I have one final example exponential of miracles.
Here are 3 that happened this last week. Even I was blown away…

I'm currently in Southern California and last week I was down at the beach with a couple of friends walking along the Strand, out of the blue I was stopped by Russ Weiner the founder of RockStar Energy Drink. He gave me a hat and we took some photos together and had a few quick laughs. Today I received a 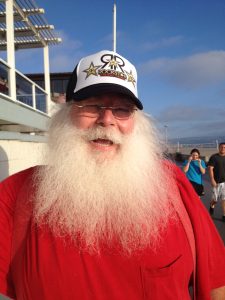 Facebook message from RockStar saying they will probably use some of photos when it gets closer to Christmas.

Later that evening my friends and I went out to dinner at a funky little beach pub, on my way out I was stopped by the director of the TV show, Jimmy Kimmel Live. We took some photos together, exchanged cards and he has now asked me to "make some TV" with him… these things have become my new norm… and really I didn't even give them a second thought until this third thing happened and this was SO WEIRD I just had to share this…

I get out of my car directly in front of my friends house. It's a small, quite, residential street. As I'm closing my car door a car slows down to a stop right in front of me. The driver asks if I portray Santa Claus, I smiled and said that I do, he said he was a photographer and that he would like to talk with me about having me sit for some photos in his studio and he handed me a business card and asked if I had one… I handed him one of mine.

He drives off I go in the house and sit his card on my desk and pretty much forget about it. A couple of days later I see it beside my computer and decide to checkout his website. It's a nice site and I can see he's an excellent photographer so I complete the form on his site and tell him that I'm the Santa he approached on the street and that I think he does great work. I also mentioned an amazing photographer/artist on the east coast who I have wanted to work with for a few years and who I have even called and talked to about the possibility of working together at some point. I included a link and suggested that he take a look at this guys amazing work.

Thanks again. God sends me people just when I need them!

This was a 2 way miracle… perhaps all are.

Boldly do what you do without attachment to the outcome and expect miracles to come your way.

All the best to you and to all the lives you touch.