For most of the last 5 weeks several large forest fires in Southern Oregon and Northern California have filled the little valley I live in with smoke. Depending on how the wind was blowing some days were better than others, but for many of the days the smoke was very dense. Forecasters predicted the fires would burn until November and the smoke would persist for 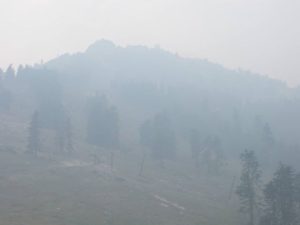 Yesterday and the day before we had rain, lots of rain. Heavy rain like this in August is very unusual in our area and for the first time in over a month I'm looking across the valley and seeing perfect blue skies and white puffy clouds.

How We Deal With the Fires and Smoke in Our Lives…

Many people here allowed the smoke and haze to shift their focus. Much of the local conversation shifted to "how bad it is". This was the topic of casual grocery store conversations as well as deeper heath related discussions. Medical practitioners even reported an increase in depression.

Me, and a number of my local friends, took a different approach to the smoke. We simply accepted it. Some of my friends simply left the area, deciding a time was perfect for trip to the coast. I was very involved in preparing for my daughter's wedding so my wife and I stayed. We took actions to protect ourselves both physically and psychologically, we kept the doors closed, we used an air filter, etc., but we were not unhappy or depressed, we simply accepted what is and held  an energy of positive anticipation, hope. We believed for the winds to shift in a way that would minimize the smoke in the area on the day of, and the days surrounding, my daughters' wedding.

As you probably have guessed I'm now seeing the fires and smoke as a metaphor. The fires that caused the smoke were many miles away… we were in no danger from the fires themselves. The fires were natural, caused by lightening, we were simply downwind.

We all experience many fires, and many winds. The fires are a natural part of life and relationship, and they are often far way, they are in the past or a projection into the future. Most of the time right now, the present,  even with the smoke and the haze, is pretty good. When the smoke is REALLY thick we can be tempted to shift our focus to the negative rather than simply accepting what is and doing, in the present, what we can to make now better.

We must, in the thick smoke, close our doors and stop dwelling on the smoke. We must take action, plug in an air filter, that is, think clean thoughts, recycle the positive and filter out the negative.

The fires of life come and go, the smoke is thick at times, but the wind, and your own purifiers will provide relief, and in time, the rain will clear all of the smoke away. And very often that time is much shorter than you think. This too shall pass.

By the way, the winds we believed for came and blew the smoke away on the wedding day… and the honeymoon is under clear blue skies. Oh yes, and it is still only August… not November.