Friday night, September 16th, 1988. I was in San Francisco standing barefoot in the parking lot at the airport Marriott. I could smell the wood smoke and see huge bon fires. One man pushing a wheel barrow and another with a shovel came and added new coals to the 10 foot lane of smoldering coals stretched before me.

When they were done I stepped my right foot onto the burning hot coals, I could hear them crunch and feel them as they compacted beneath my foot, then my left foot crunched on the coals. With time suspended I made my next step, and then the next, and next, within a few seconds I was standing on the other end of the coal. My feet, not a sign of the fire. Not a burn or blister.

The next morning in the restaurant I talked with 3 people who had their feet wrapped in bandages, one had a foot in an ice bucket. They had burnt their feet on the coals.

During the late 80's and early 90's I made several firewalks including a 35 foot walk in Hawaii. I never burned, but each time some people would get burned. Some rather severely, 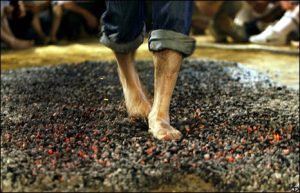 but most were minor burns.

Set aside for a moment why me, or anyone, would even attempt to walk barefoot on burning hot coals and why some would not get burned, in fact in each of my experiences, I would say 98 or 99% did NOT get burned, but a few did. Why?

Here's the thing, for me the why was not nearly as important as the fact that:

My mind was opened to new possibilities…

Let me give some context to the story and show why this is important.

I didn't come to firewalking because I was looking for something that would transform my life, and it wasn't on a dare.

Tony Robbins was a client of mine (in the late '80's and early '90's). I was a marketing consultant and Tony hired me to help

expand his business. I felt that I would be better able to help him if I experienced firsthand what it was he did. The first time I saw Tony speak to an audience was that Friday in September in 1988. The night of my first firewalk.

Here's my point. It has NOTHING to do with walking on coals or with Tony Robbins. My point is simply this:
Many things that seem impossible, are actually quite possible.

Things that can change your life often show up when you aren't even looking for them. When you least expect them.

In order to fully receive the Greatest Gifts you have to be open to new possibilities.

P.S. None of the 9 Greatest Gifts that I will cover in the e-booklet and videos are as "out there" as firewalking but it will be very beneficial for you to come to the gifts with a very open mind.

I'll talk with you again soon,