Our "Greatest Gifts" fill us with High Spirits, Happiness & Joy!

Do you ever feel unfulfilled or discontented? Do you sometimes sense that you’re not living true to your “purpose” or “calling”?

Perhaps your Soul’s Purpose is writing a book, or creating art, or teaching, or providing healing or any of a thousand different things. Whatever it is you feel called to do it. It’s not something you want to do “for the money” it’s something you need to do because it completes you… and perhaps it will make you money too, and maybe a lot of money, that’s all fine, but it’s not about the money… it’s about living in alignment with your Soul’s Purpose.

Does this make sense for you?

If so, you are in the right place… at the right time.

My name is Gail Kingsbury and I would like to introduce you to this amazing man who I have known for more than 20 years.

For as long as I have known Ed he has been full of high spirits, happiness and joy, even before I knew that was the definition of Jolly… and long before he became “Santa” Ed, and even when he was going through some incredibly difficult times.

When I met Ed I was working for Tony Robbins and Tony had retained Ed and his company to help with the marketing of Tony’s seminars.

Through the years I have worked with Ed  on many projects, I even arranged his first bookings as an Internet marketing speaker in the mid ’90’s. By the way, Ed went on to become one of the most sought after Internet marketing experts in the country. He’s a brilliant marketing strategist and an excellent communicator.

I was also there when Ed filed for bankruptcy and lost his home to foreclosure. I saw him give his Lexus back to the dealer and sell his gold Rolex watch. In addition to good times Ed has lived through some incredibly tough times- and not just financially.

Ed also experienced prolonged anguish, as his son, from his early teens to his mid twenties, put himself and his family through a living hell on his way to being diagnosed with bi-polar schizophrenia. By the grace of God, and through the unconditional love of Ed and his wife, Lori, I can now report that his son is doing incredibly well and has become a valued member of his community.

On one occasion I talked with Ed and he was slurring his speech so badly I thought he had had a stroke. He was later diagnosed with severe sleep apnea. His stories about going from years of severe sleep and oxygen deprivation to being restored in a matter of hours are truly astounding!

At 58 years old Ed embarked on an entirely new adventure. He became “Santa” Ed, a real live Santa Claus for people of ALL ages by providing us with “9 of Lifes Greatest Gifts”. 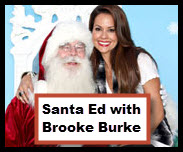 I have even watched as Ed become one of the premiere “real bearded” Santa’s in the U.S. appearing on TV shows like “The Today Show” on NBC and “Ridiculousness” on MTV, The TALK on CBS and with such notables as Brooke Burke and Neale Donald Walsch, the LA Lakers and Clippers… and many, many more. See http://santaed.com/

Is Santa Ed some sort of story book character or bigger-than-life American Happiness Guru? Actually no, he’s an ordinary man who now lives in Ashland, Oregon with his wife Lori, and their 2 adult children nearby.

However “Santa” Ed has one FASCINATING trait… a gift that he brings and freely gives to all who he interacts with, his jolliness.

He is ALWAYS jolly! OK, always may be a bit of an exaggeration, but seriously, “Santa” Ed is one of the happiest, most contented, fulfilled and high spirited people I know.

How, after failing in business, going broke, parenting a bi-polar schizophrenic son and basically living a life filled with challenges, setbacks and disappointments, can this man consistently maintain his high spirits and be truly happy, contented and fulfilled?

In the “9 Greatest Gifts of All” FREE video series you will see how these gifts have served “Santa” Ed in his life and how they can serve you in yours!

You see, the last 30 years of “Santa” Ed’s life has prepared him to be right here, right now, delivering this “9 of Life’s Greatest Gifts”video series to us.

Each “Greatest Gift” includes a short text and video message from “Santa” Ed. These Gifts are designed to help you live a life of meaning and significance, one that is happy, contented, fulfilled and full of high spirits. You will become JOLLY!

To receive your copy of  “9 of Life’s Greatest Gifts” videos simply complete the form above on the right. There is nothing to buy and you will not receive any spam. You can also call Santa Ed at 424-343-9555

TESTIMONIAL- “I have truly enjoyed your “9 of Life’sGreatest Gifts.” It has been some of the best advice I have received in a very long time. Thanks for taking the considerable time to put it all together.”